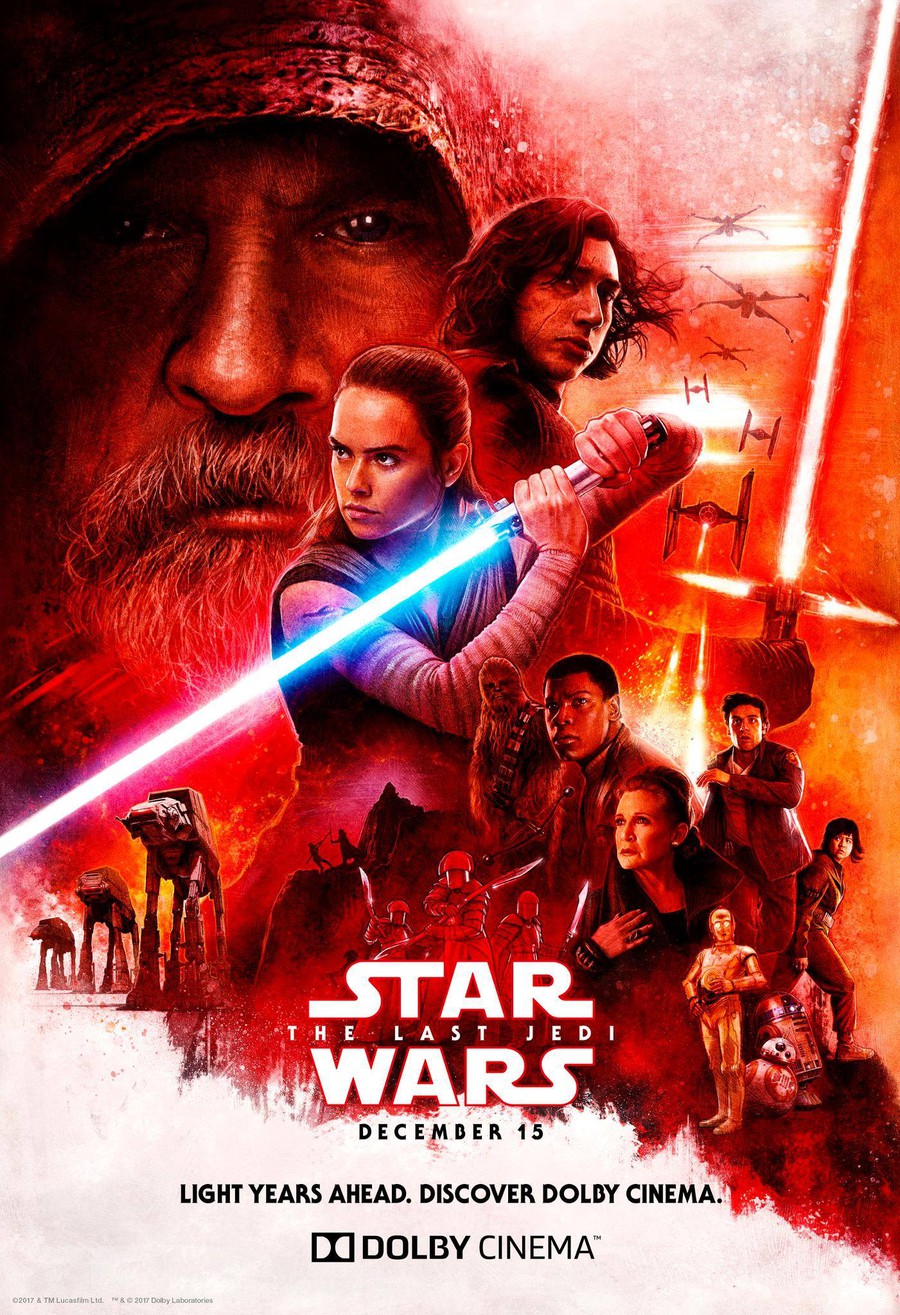 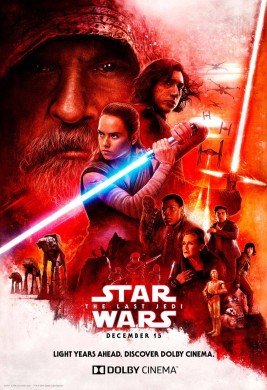 Over here I wrote a quick Spoiler Free Review: Star Wars: The Last Jedi. I was going to write up another review, but don’t really see the point. The points I made in that admittedly short review pretty much stay the same even after I wrote all of this up. And there is a fairly large amount of words after the jump. I’ll run through the movie, and yes, there will be spoilers. Lots and lots of spoilers. You’ve been warned.

Alright. Star Wars: The Last Jedi begins exactly where The Force Awakens leaves off. Rey is offering Luke back his old Lightsaber, the Resistance has just destroyed StarKiller base, Finn is healing after getting a lightsaber across the back that totally should have killed him. Kylo Ren is up and wandering around despite getting a lightsaber across the face that totally should have killed him.

So what happens when Luke accepts the lightsaber. He looks at it then chucks it over his shoulder and off a cliff. Seriously. His fathers lightsaber (To be fair, Anakin goes apparently goes through like a million lightsabers in the prequels so maybe this isn’t a big deal), his first saber, the one he lost along with his hand. He shrugs and tosses it over his shoulder. We then see Porgs playing with it while one looks right into where the beam would extend. Unfortunatly they don’t turn it on and impale a Porg before Rey picks the lightsaber back up.

Luke is a broken man in this movie. He refuses to train Rey and instead just tries to get rid of her. On the bright side we get to see Chewie eat some Porgs, while they stare at him with big cute eyes. No seriously this happens. And the entire theater laughs because they’re guilting him for eating them. Imagine trying to eat a burger while a heard of cows stares at you with big sad eyes. Yeah.

Finally he decides he’s going to train Rey. Has her sense things. She senses darkness and goes right to it. He freaks out because she doesn’t even try to stay away from it. Flips out about being afraid of so much power. Cut to the next day and we’re back to training because hey that first day didn’t happen. During this time Rey has visions where she’s talking with Kylo, we get some backstory on why Kylo turned (Snoke is apparently responsible, though it’s not explained how or why. Just that Luke stands over him creepily while he’s sleeping reading his mind and sensing the darkness.)

Oh and during one of these little long-distance talks Kylo reveals he saw who Rey’s parents are. Nobody. Just some traders or some kind of scum who sold her for money. We then move on from this subject. Yeah seriously, all of those internet debates, looking for clues in Rey’s visions, hearing Obi-Wans voice. Nope, a couple of throwaway lines and then never revisited again cause who cares?

Then Rey learns what happened with Kylo from Luke after they have a fight. She leaves and runs off to meet with Kylo. Yeah, seriously that happens.

Oh I nearly forgot there’s a whole other plot where the Resistance is down to just 3 ships, eventually just one last ship and just 400 people left. Finn and Rose (new character yay) leave to find a slicer (hacker) that can get them onto the lead ship of The First Order thats tailing them because it can track them through Lightspeed. So they need to disable something on the ship to prevent them from tracking them anymore.

This entire subplot ultimately does not matter. Nothing they do matters. Finding a slicer, destroying a town full of rich people, getting onto Snokes ship and of course getting caught. Not a single minute of it matters. They don’t go through with that plan and end up with a finalish confrontation on a nearby planet. Also Captain Phasma shows up again, Finn fights her, she falls down into a pit of fire. It’s not clear that she’s dead. Once again this character is completely wasted. Though her armor does actually deflect blaster shots, which begs the question why every stormtrooper isn’t rocking the reflective armor.

Snoke has a larger part, interrogating Rey. There’s a great bit where Rey uses the force to pull back her lightsaber from Snoke only for it to whizz around the room and smack her in the head from Snoke. But Snoke is killed by Kylo Ren after some revelations about Snoke using The Force to link them together. Snoke would have seen it coming too if he had just opened his eyes rather then seeing it all through The Force. But I guess eyes are overrated. Good thing we didn’t want to know anything about Snoke as well. Once again despite all of those questions after TFA. How does Snoke know how to use The Force? Did he train with Palpatine? A secret apprentice? Another Sith Lord that Palpatine didn’t know about? How did he corrupt Ben into becoming Kylo? How was he able to amass the power to create StarKiller base and create the First Order from the ashes of the Empire? Oh wait, he’s now cut in half, doesn’t matter.

There’s a pretty awesome fight right after though with Rey and Kylo fighting together against a bunch of red-clad guys with some pretty cool weapons. Then Kylo, of course, wants Rey to join her and rule the galaxy side by side as Father and Son. Oh wait, uh, friends in arms? Whatever. She says no, escapes when a capital ship slams into Snokes ship at lightspeed (this was actually pretty awesome too) Kylo is now the Supreme Leader and down to the planet to finish off the resistance.

Those previews with the ships along the ground turning red and the weird gorillaesk ATATs and yeah. Doesn’t matter, they break in. But then Luke finally decides to do something, shows up and all the ATAT thingies and a ship open fire on him for like a minute. Luke walks out and dusts off his shoulder. Everyone laughs, and this is also awesome. Kylo goes down, has a lightsaber battle and Luke pulls off some Matrix moves and it’s also awesome.

Turns out though Luke isn’t there. He’s back on his island, floating in the air and is projecting an image into everyone’s mind. The resistance flees out the back and apparently all 300+ people fit into the Millineum Falcon. Back to Luke and we see him collapse and claw his way back up, stares off into the double sunset while his theme plays with a great callback to A New Hope. He then fades away ala Yoda and is gone. Mark Hamill is now free to move on to do other things since Luke is dea…Oh wait no, he’ll undoubtedly be back as a force ghost. Yoda showed up earlier and burnt down a tree. Yea, he did that, as a ghost. Cause apparently force ghosts are something to be reckoned with. Maybe that’s why Obi-Wan allowed himself to be killed by Vader for no other apparent reason.

I’m really curious how long it takes to become a Jedi though. In the prequels, they show young children learning to become Jedi. Luke went through a lot of training with Yoda. Rey seriously gets like two quick lessons and according to Yoda no longer needs Luke to teach her, she already has everything she needs. This is after she went up in a lightsaber duel with an already trained sith lord, shes also mind-controlled James Bond, and can move rocks and call lightsabers to her with no apparent problem or any real training.

Granted at the end there’s a quick show of the original Jedi books that are in Rey’s possession. Luke thought they had burned down with his special tree that Yoda set on fire by calling down a bolt of lightning. So I guess that’s the knowledge Yoda meant when he said she already had what she needed. Not sure she needs it though considering how shes already doing all kinds of cool Jedi things with basically no training.

The movie takes place over maybe 3 or 4 days. Snoke is dead, Kylo is now supreme leader. Luke has dissolved and the resistance is maybe 300 people. But hey some kids are playing with toys talking about Luke, and I’m pretty sure I saw a kid use The Force to pull a broom to him, so there’s hope. And rebellions are built on hope. 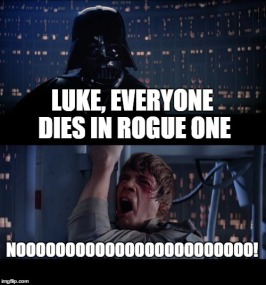 In my other review, I compared the characters to Porgs. They are everywhere on that island, and they do things, and none of it really matters. After writing this longer overview I still believe that. The Resistance was barely more than a ragtag group at the start of the movie, and they remain that way. Luke wasn’t helping them and now he’s dead. Leia survives, though I have no doubt they would have killed her character as well had Carrie Fisher not passed. Han is dead. Chewie is still alive, he even gets a hug at the end, still no medal though.

I feel like you can skip to the next movie without having watched The Last Jedi and not really have missed anything. None of the characters really grow or change, with the slight exception of Poe, and it wasn’t necessary to show that growth or change because we didn’t see the character flaw in TFA. Rey would probably be better off with Force Ghost Yoda teaching her, and Luke could have stayed on his little island drinking super fresh alien milk. (Yes, you read that right).

There is a surprising amount of humor in The Last Jedi, which is greatly appreciated. I won’t compare this movie to Empire Strikes Back, because it doesn’t deserve it. But TLJ does stick with the gets worse before it gets better formula, so the humor is greatly appreciated to break things up. And not with JarJar style humor. And like I said in my other article. I’m still going to buy the Blu-Ray, and I would probably go see it again.